The program will begin at 7:00 p.m. in the USC Sumter Arts and Letters Lecture Hall and will last approximately one hour. The event will be free and open to the public, and the Congressman will answer audience questions after he speaks

Constitution Day is an American federal observance that recognizes the adoption of the United States Constitution and those who have become U.S. citizens.

Congressman Norman is a lifelong resident of South Carolina's 5th district. He studied at Rock Hill public schools and graduated from Rock Hill High School in 1971. He attended Presbyterian College in Clinton, SC, and graduated in 1975 with a Bachelor of Science degree in Business.

Over the course of his career, Norman has served with several organizations dedicated to improving the community. These organizations include the York County Home Builders Association, the Children's Attention Home, the Salvation Army and the Medical University of South Carolina Board of Visitors.

Norman has been married for 42 years to Elaine Rice Norman and together, they have 4 children: Ralph Warren, Anne, Mary Catherine and Caroline, and 16 grandchildren.

The Sumter Community is invited to help us celebrate Constitution Day with Congressman Norman at USC Sumter. 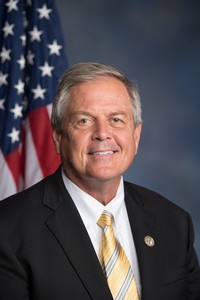